This blog post is following my writer friend Malaka‘s comment  saying — I’m the only person she knows who has vehemently insisted there are Christmas carols written and sung in Yoruba (my native language from Southwestern part of Nigeria) — 🙂   And there are really, traditional ones and one I incorporated here ‘Olugbala’, an original I wrote in 2012.  However, in this post, I am sharing a homely informal spontaneous recording of a composition of my musical brother ‘Tosin’ who I’d spotlighted sometime ago on the blog . He did a quick fly by Atlanta a couple of weeks ago.. and we decided to do an impromptu acoustic recording of a Yoruba ‘Owambe’ (party vibe) Christmas Song he wrote.

Here’s wishing you all a fantastic Christmas filled with love, joy , peace and everything Jesus the reason for the season brings. Enjoy and share! 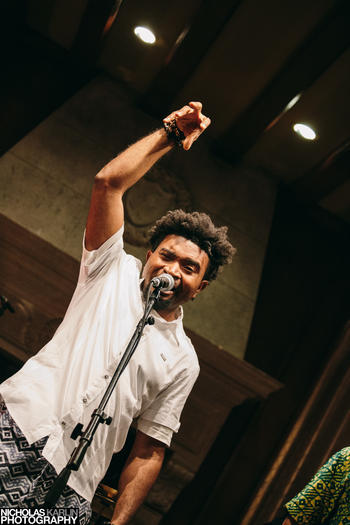 I grew up in post-colonial Nigeria, but the residue of colonialism was still palpable enough to have some impact on the post-colonial kids. For instance, I had British teacher in elementary school, and a British principal in high school. So we kept to some “oyinbo” (Caucasian) mannerism. However, I was able to, and still, blossom in my African way of life through enculturation fostered by my parents and my surroundings. And my musical direction is a reflection of this way of life.
With that said, I recently thought about doing an Afrikan Christmas Carol. Not that some African composers have never written some before, but I realized that we just repeat the same ol’ ones. So, on Wednesday morning (Dec. 10), the Heavens blessed me with a new composition. It was a few hours before my flight to Atlanta. And on getting to Atlanta I decided to do a quick collaboration with my Nigerian sister also called Tosin. The style of music I employed for this song is called Owambe.

Hope you enjoyed it!

In the mean time, the campaign for my debut album ‘Organically Singing’ is still on.. just a few days left!! If you haven’t, please check out the link here http://bit.ly/1wK84Iv contribute, support, pre~order/get perks for this good music about to be cooked, the kitchen is set, the cooks are skilled, we just need help with getting the ingredients to begin the process. Thanks to those whose hearts believe in the project and have been sharing the link. Campaign ends on Dec 29. Thank you! And the meraki goes on …  Season’s Greetings!

Music washes away from the soul the dust of everyday life.  ~Berthold Auerbach

Hope everyone is doing alright. There’s always music to make you feel a little better. Right?  The spotlight is on a very good, personal, musical friend of mine, coincidentally a namesake, TOSIN (Tosin is a Nigerian (Yoruba) unisex name, short form of Oluwatosin which means ‘God is enough to be worshiped or God is worthy to be worshiped). Tosin is a songwriter, vocalist, drummer extraordinaire, composer and arranger. He is one of ‘us’ carrying the torch of African music in the US diaspora. He is  a renowned drummer & percussionist (oh I said that already :)) former – Ayetoro band member who has played with who’s who in the industry including Spyro Gyra, Femi Kuti, Andres Levin, Jon Carroll, Antibalas, Julie Dexter among others. More on his site. I absolutely love his sound and vibe, afro feel with a touch of contemporary lacings, and his use of the Yoruba language, just like my music. Keep scrolling. 🙂

I will let this video of his interview with Heather Maxwell do the talking. Enjoy.

Click on Tosin’s image below to learn more about his music, connect with him and get his latest project ‘Life Begins’